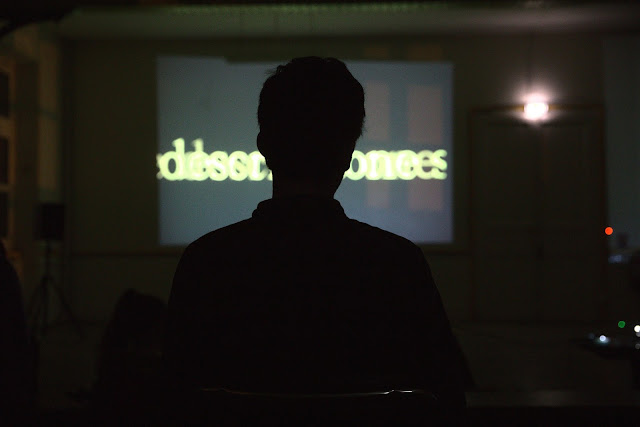 "At the time of searching for a teaser track for the blog from the French composer, imprint owner and blogger Nicolas Tourney's brand new one Ram I was inclined sensually to find out just one track called Bluebeard. However, having been listened to the 15-track outing many times in a row I can admit it to be a great one. Indeed, it is about tonality and microscopic sensuality within broadening and narrowing swathes of exquisite sound. Lots of used to happen in reality and a listener's mind or being inseparably intertwined with one another. It is like a wondrous universe with stable arrangement of sonic elements and little changes coming in and moving outside. Wavering quietude is compellingly represented throughout the course there. Less is more on the base of this issue."

Although they’re several decades old at this point, the innovative graphic and other open-form scores of the postwar New York School composers continue to provide inspiration and stimulation for fresh interpretations from contemporary performers. Part of the reason for this could be the very openness and indeterminacy of the works; given so much latitude within their suggestive constraints, a performer is free to bring to bear his or her own musical background in choosing specific musical values for the variables the scores leave open. American Composers, a new recording from French musicians Nicolas Tourney and Phil Canals, which contains thoughtfully creative arrangements of a number of classic works by Christian Wolff, Morton Feldman, John Cage, and James Tenney, shows just how alive these works remain.
Tourney, a guitarist and electronic musician, is credited here with electric guitar and objects; Canals is a multi-instrumentalist represented here on saxophone and stones. The two collaborated on 2019’s Looking North, an album that combined elements of electronic drone and freely melodic saxophone improvisations. On American Composers, they eschew the denser textures and more aggressive timbres of the Looking North in favor of a sound that respects the open musical spaces implicit in the scores they’ve chosen to realize.
The opening track, Wolff’s Looking North, is a verbal score from the collection Prose Pieces. Tourney begins with an elastic but discernible pulse laid out in harmonics and semi-muted tones; Canals contributes evenly-weighted lines on the saxophone. Both explicitly through sound and implicitly through silences Tourney and Canals’ interpretation maintains the rhythmic continuity the score calls for. Brown’s December 1952, arranged for solo guitar, is an unusual realization of the classic graphic composition. Tourney’s way of grouping individual notes and chords gives his version more linear continuity and less pointillistic intermittency than many other versions of this always provocative piece. Also unusual is the duo’s setting of Feldman’s grid-like graphic score Projection 1, originally composed for solo cello. The piece here is realized for both guitar and saxophone. Canals plays most of the score’s events; his largely staccato reading is punctuated on occasion by Tourney’s sparse interventions. Canals gives a solo performance on Cage’s early Sonata for Clarinet, a semi-serial piece Cage wrote in 1933 while studying composition with Richard Buhlig and which was composed before Cage really found his own voice. The other Cage piece Canals and Tourney interpret is 1950’s A Flower for voice and closed piano. Canals plays the part for voice, which is mostly confined to four notes, with a contrasting mixture of vibratoless and vibrato tones; Tourney supplies the piano part by drumming with his hands on an opaque surface.
The album also includes the roaring rush of Tenney’s Having Never Written a Note for Percussion; Brown’s 4 Systems, a graphic score of variably-lengthed rectangles similar to December 1952 which Tourney and Canals realize with a predominance of overlapping long tones; and Wolff’s Stones, another verbal composition from Prose Pieces, which instructs its performers to make a variety of sounds using…stones.
(Daniel Barbiero, Avant Music News, April 2020)

"It’s a bit difficult to sum this interesting album up in just a few a words. A lot of it is peaceful, but there are moments that are a bit more unsettling; “Inspira, Espira” features both elements, with wind sounds mixed with a higher pitched screech like a subway train braking. Many of the earlier tracks feature a sound comparable to Tibetan singing bowls, putting you in a zen-like space even when there are some subtle industrial noise elements mixed in. Some of the later tracks are longer and push the sound into a bit of a more experimental space, but there are also moments mixed in that are barely there. I guess I can sum it up by saying if you like both noise and ambient music, I think “Presencia” will have you covered."

"French experimental musician Nicolas Tourney has already released six albums in the new decade this year. It's beautiful music - if you can call it that at all. But it can be - I guess I just did it. Again associated with awakening, growth and subsidence. Which is not as bad as raising eyebrows, because it is an eighteen-story work focusing on drone sounds. And it undoubtedly requires attention to perceive all the seemingly non-existent details and intensities in it. There are many good moments in this masterful publication, but some particularly captivating tree is accompanied by electrically charged pulsating wave frequencies. It's like a dance party of the most minimalist minimalism. This type of music is a presentation of different wavelengths alongside a more or less spaced expansion of sounds. And the difference is the main emphasis - you can't escape the interrelative comparative monument between the stories - it's quite presumptive. The publication is a note in the discography of the US label Vulpiano. Excellent ventilation of pipes and wires."

"A remarkable yet unsettling recording. Atmospheric to the nth degree, Nicolas Tourney's second full-length album of 2020 sees the artist take a skydive into the ether. Like the album cover that perfectly sports a photo of a field underneath a foggy sky, the tone of the record is dark, unpredictable yet ethereal. An album that's quite challenging to pin down musically as it's an instrumental droney album that touches on ambient in specific parts. Aër is the Middle French word for air derived from the Latin word āēr and the ancient Greek ἀήρ [aeer]. Aër is a concept album of sorts, while the tone is foreboding and dark; there are moments of clarity such as on tracks like "Corpus", "Focus" a track that touches on ambient. At the same time "Subterranea" is a captivating electroacoustic piece. A sense of uncertainty, like a hurricane, approaching, that yet never comes. More or less that's the whole texture of the album. The final three pieces "Varia", "Duplex" and "Soni" flirt with dark ambient. From start to finish Aër is a truly remarkable album indeed. Experimentation aside there are tonnes of other influences all over the record from industrial, geological, and metaphysical sensitivities. The more you listen to it, the more they become apparent."

"I wish I was a good writer but unfortunately I’m isn’t because this is an album of resonant drone pieces that deserves to have something good written about it, rather than what I’m about to do. Which is, mumble my initial thoughts out loud at my laptop while typing whatever spills from my mouth. Nice cover on this album and don’t worry, I’m not mentioning the cover just to pad out the word count. No way would I ever do anything thing like that. No way. No way. No way would I ever do anything like that. Never. As I listened to this record I found myself staring at that top window, envisioning what might be going on inside the building and the music worked perfectly with this. So perfectly that I was sure it had to be intentional. I found these pieces to be like the most suspenseful moments from television and movie soundtracks distilled down to their purest essence. As I looked into the top window of that blue building I could see a TV in there, flickering away, showing a car chase or a stalking murderer. The scene drawn out and foreboding, the strings swelling but never quite paying off, never quite reaching their climax – imbuing my imagined scene with a dreamy, purgatory-like quality. Was somebody in that building? Did they know I was there? Could they see me? It was a weirdly compelling experience and one that I very much enjoyed."

"Nicolas Tourney is a French experimental musician, sound designer and owner of the Snow in Water Records label. His electronic works refer to perception and the act of listening, with the use of various strings, drones and devices that make noise.

Diffuse Reality Records' Teorema label presents his fourteen-track work titled Awaiting, in what appears to be a mind-blowing journey through the sound of the French producer on the Argentine-Spanish label.

The entire album is coming, and Club Furies presents the premiere of the penultimate track Resolve Paradoxes, which in part refers to a subject that we are particularly passionate about: paradoxes.

The paradoxes, says Luhmann, are formulations that do not affirm anything, because there is nothing that corresponds to them, and from Nietzsche and Heidegger, until arriving at Derrida, the paradoxes are not avoided or annulled but rather put in evidence. They are passionately celebrated; but before they were avoided seeing, like Stenos, one of the Gorgons.

So let's play. Resolve Paradoxes appears wrapped in that halo that covers that part of Homer's Odyssey in which the ship meets the Gorgons and to avoid looking at them the captain asks the helpers to tie him up as he passes by: will he avoid looking at them or will he succumb to its magic?

The anguish and stress that is woven into that image has its sound correlate in this track, which is paradoxically called Resolve Paradoxes, which, as in the history of the thought of the concept of paradox, in Ancient Greece was ignored because it petrified the thought, and in modern and contemporary thought they are celebrated, on this track we find the following dilemma, which starts from that dichotomy: to see or not to see the Gorgons, while the track flies over and crosses the entire scene.